America is a great and wonderful country, but we think it is time for a new renaissance of the American Dream.

It is time for individuals, families, businesses, communities and our nation to create a relevant dream for today. We were founded on noble dreams and concepts that can be expanded and molded to envision the next dreams for your life, business and America.

Sometimes the past can shed light on our present.

…And so the story begins…

A rebirth was in high order. The Middle Ages endured a period of wars, rampant disease and discrimination. Death and destruction was ruining the “civilized world” and the nobles seemed willing to weather the storm forever. After all, the class system they had put in place worked well for so many years.

But there were those brave souls who had a different way of thinking. They heard the stories and experienced the squalor of the past and were no longer satisfied to live the status quo. They took risks and stepped out of the normalcy to define a new way of thinking that was much more humane, much more inclusive, and most importantly, encouraged a freedom of expression.

Although there are countless scholars who will debate the very existence of the period we now call the Renaissance, it is widely accepted that it began in Florence around the 1400’s and ended with the beginning of the Classical Period around the 1600’s. The inspiration for much of this thinking came from Greek scholars, philosophers and poets, and writings from Arabic texts. 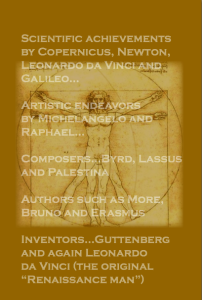 This was a time of great advancement in all fields of study.

Governments were changing to reflect a new wave of humanism.

At the forefront of this movement was the Medici family, the rulers of Florence for decades, famous for being patrons of the arts. This was an interesting time for the people of Italy as they suffered through the plague, or “Black Death”, more than any other European country during the Middle Ages. It has been said that the Medici’s support of the arts was, in part, meant to restore faith and hope to a rather devastated republic.

This was also a time of exploration beyond the known landscape. Explorers like Columbus and Magellan soon sailed across the uncharted seas to discover new worlds and cultures, risking their reputations, the treasury of their leaders and their lives as well.

The Humanist movement was in full bloom and followers were insistent that real progress would be made if everyone would search for realism and depict human emotions in the arts and sciences, not just the previous teachings of religious scholars.

One can argue, and many have, that the Renaissance gave mankind a chance to take a quantum leap…a leap from a very dreary existence to one of limitless potential.

It was a period of enormous growth and change for humanity, for the good of the individual and the improvement of the quality of life for the masses.

The Renaissance represented an intellectual transformation in European history, from out of the dark and deadly past of the Middle Ages to a period of individual growth, scientific achievement and cultural diversity…… 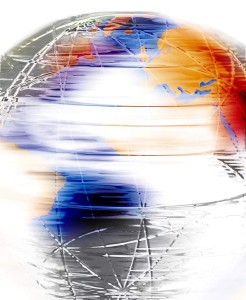 So…..what does all of this have to do with us today?

The uncertainty and accelerated rate of change of American life would also suggest that it may be time for our own version of a Renaissance.

The world market is literally at our fingertips. We battle for oil supremacy and human rights. The physical and mental health of the world population is struggling and we are consuming at a rate that cannot be sustained.

In spite of so many available tools, illiteracy continues to limit children, families and economies. Our environment is stretched to the breaking point and we have abused the very resources that grant us life.

• At the rate of technological advancement, we are currently attempting to educate our children for jobs that do not yet exist.

• One out of every eight married couples meet online first…not face to face.

• There are now five times as many words in the English language as there were during the Renaissance.

• One week’s worth of news in the New York Times newspaper includes more information than you could have gathered in your entire lifetime during the 1600s.

• In less than forty years, we will have access to computers that have more computation ability than the entire human species combined.

Quite simply, our lives have changed.

Visit our other websites